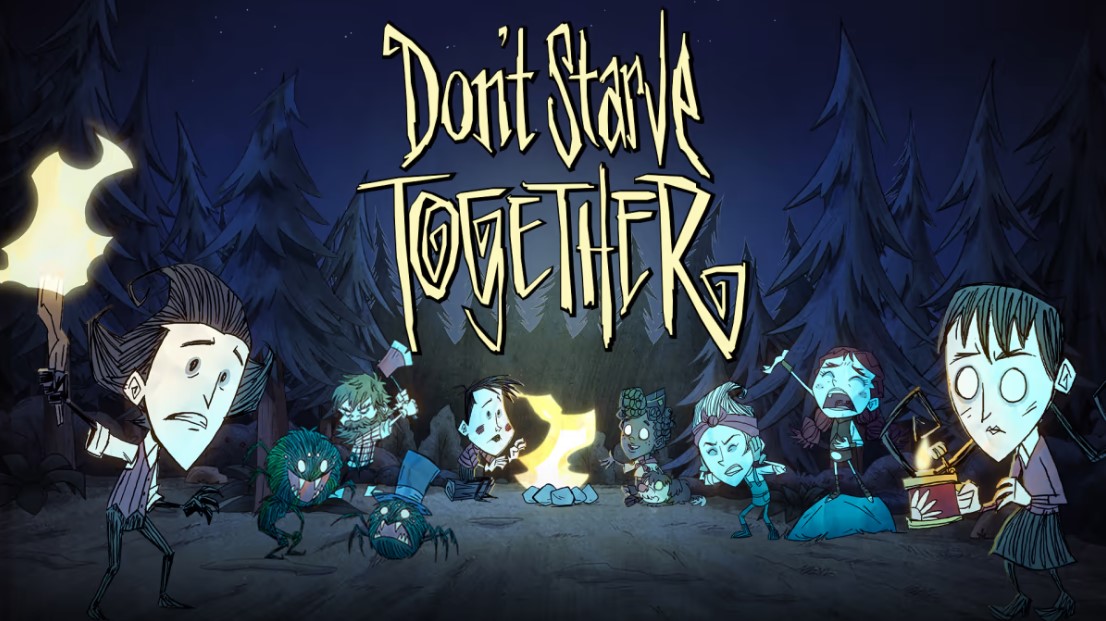 Don’t Starve is an action-adventure survival game that was a big hit for many players before. But there’s one element that’s lacking, and that’s the multiplayer aspect. So, enter Don’t Starve Together, which provided the multiplayer gameplay that many people were looking for. It provides the same gameplay, with added features to make the game more fun. The game was fully released in 2016, but a beta version has been available since 2014. Though the game has been around for a while, it’s still a great game to play.

Many gamers are trying out the game, which can be tricky to play at first. So this is why we’re writing this guide for beginners. It will help beginners learn how to play the game and also do well.

Don’t Starve Together Guide – The Gameplay

The action-adventure game provides three game modes for players to enjoy. There’s the Survival mode, which is the game’s default mode, the Wilderness mode, and the Endless mode. In the Survival mode, there’ll be a day and night cycle, where players are free to explore, farm, and gather materials during the day. At night, monsters appear and players will have to battle them. Everything the players need will have to be farmed, gathered, or crafted. Crafting recipes can be discovered as you explore and the materials you’ll need are usually farmed in the game.

Players will just have to prepare themselves to battle during the night or build a shelter to provide added protection. When a player dies, they become a ghost, but they can be resurrected. If all players die, there will be a 120-second countdown, which will reset the world to go back to day one. The goal is to survive for as long as possible. In Wilderness, the world doesn’t reset and players will just respawn in a new random location. Endless mode is more relaxed gameplay than the Survival mode except the world doesn’t reset as well.

Beginner Tips for Don’t Starve Together

Let’s now discuss some tips to help you play Don’t Starve Together. Most of the tips here are for the Survival mode since it’s the mode where there will be consequences if the players don’t do well or make mistakes.

Explore & Establish a Base

The first thing you need to do when you play in the Survival mode is to find a good place to establish a base. Players will need to have a location that they can come back to. It will make it easy for everyone to work together during the night, as they just need to go back to base. As you can see from the gameplay, cooperation is important. So, having a base is a good start to that. Make sure you set up your base in an area that’s near resources like a swamp, a grassy area, or a desert.

Make sure you’ll be able to grow resources near your base, so you can easily get them when you need them. You’ll need to have a good sturdy base to protect players and your resources. So remember to build walls later on and keep on upgrading them whenever possible. Once a base is set up, you’ll need to explore the area as much as you can. It allows you to have an idea of the environment that you’ll play in. Don’t stray too far yet, especially early on. You might have a harder time getting back before dark. Without torches or weapons, you’ll likely die.

Pick up Any Material You Can Get Your Hands On

As you start to explore, try to grab anything you can get your hands on. These materials will be used for crafting items, so you’ll need to grab as many as you can. Axe will be one of the first items you need to craft to allow you to chop down trees. Remember that items will break once they run out of durability. So, always have materials to create new items. You’ll also need material to build a campfire, which you’ll need to survive the night. Without fire, you can easily be ambushed by monsters since there’s no light.

So, make sure you have materials available to make campfires or torches. A campfire can also be used for cooking. Aside from materials, you also need to pick up carrots, berries, or other food on the ground. Yes, you can hunt animals. But in the beginning, food that you can pick up easily will be your early source of sustenance. Take note that food can spoil, so don’t eat spoiled food as it will result in loss of health. 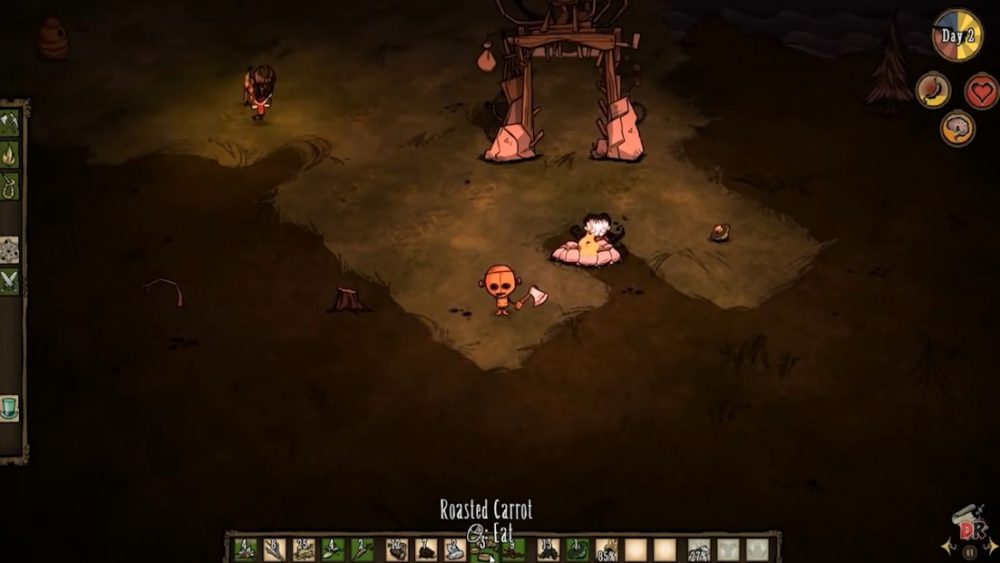 It’s also important that you have an understanding of the three aspects of the game, hunger, health, and sanity. Health is your character’s life, which will determine how many hits you can take from an enemy. Sanity is how your characters view the world. When it’s high, you won’t experience any problems. But once it goes low, you start to become distorted and will see creatures on the screen.

As it goes even lower, more creatures appear and they will seemingly attack you. Sanity goes down over time and you can pick up flowers, rest on a Straw Roll, or eat Green Mushrooms to restore them. Garland can also help with your character’s Sanity. Hunger just shows whether your character needs to eat or not. You don’t always keep this full, as nothing happens if it’s low. But once it reaches 0, you start to lose health. So, the goal is to make sure hunger is at a comfortable level. 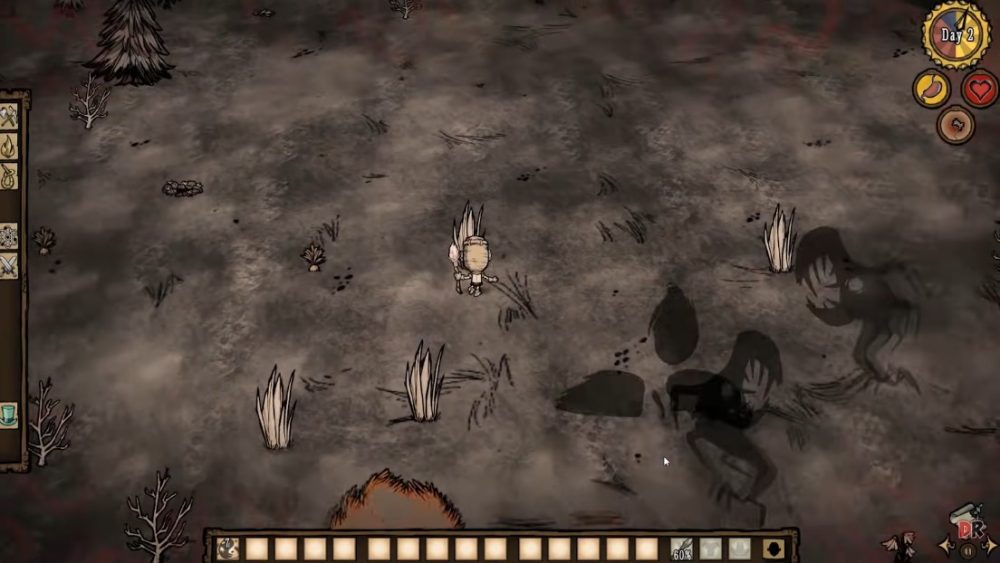 You can’t avoid fighting monsters in this game since they will appear during the night. But you can avoid engaging in a fight unless you’re ready to do so. It means having the proper equipment to give you a higher chance of winning. Early on, this won’t be possible. So it’s best to just run away unless you need a particular material from that monster.

Once you’re able to craft more powerful weapons, then you can start to engage in fights. Always be aware of your opponents. If there are many of them, it might be better to just run away. If there’s a large monster and you’re not confident yet with your equipment, then avoid fighting as well. Only engage when you’re prepared.

One of the important things you’ll need to survive in Don’t Starve Together is to be willing to try or craft new things. By trying new things, it means exploring dungeons or structures. These things might contain good resources or materials you can use to craft better items. Speaking of better items, you’ll need to create prototypes of new items once you’re established a bit. It allows you to have better items to use in the game, which is needed as you survive longer.

Survive with this Don’t Starve Together Guide

To do well in Don’t Starve Together requires you to take certain actions early on. Remember, the goal in this game is to survive, so that should always be your focus and not fight monsters. That will come once you get the hang of surviving in the game. But for more guides and news about this game, make sure to stay tuned here in PlayPC. 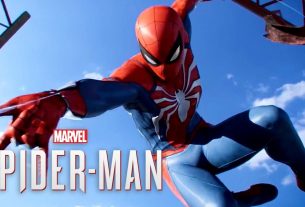 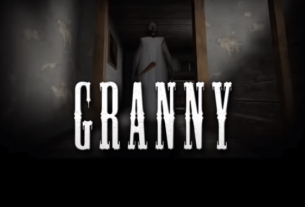